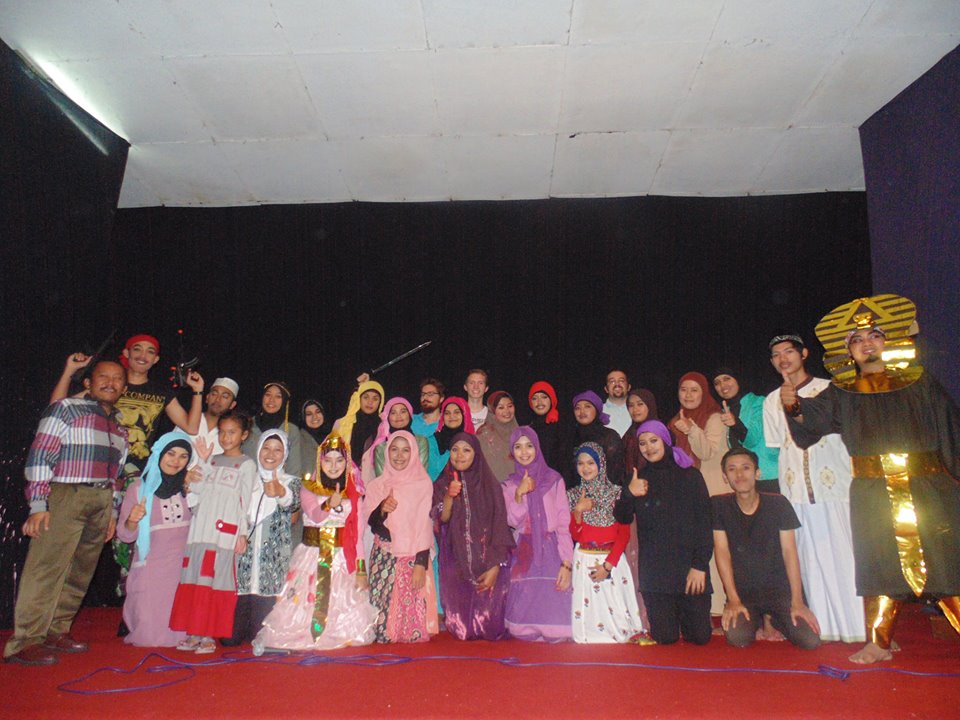 Friday, January 29th 2014, STAIN Salatiga’s meeting hall, Mr. Hanung’s class (Literature Appreciation) had an English drama performance instead of written exam in final examination. This became an annual activity. He said that students looked more interested and cheerful in performing drama than doing a written test :D. The three foreigners also watched this performance, they are David and Alex from German and John from USA. The lecturers also came; Mr. Benny Ridwan, Mr. Gufron and his wife, Mr. Hanung’s wife and daughter, staffs and students of STAIN Salatiga.

There are 2 dramas performed. The first was about Siti Masyitoh’s story in Musa prophet and Fir’aun era. Siti Masyitoh had to face Fir’aun’s cruelty that he finally decided to throw her husband and children into a very-hot water. She was still tough and did not admit that Fir’aun is a GOD, although eventually, he also threw her into a very-hot water but she believed that she died in her true faith.

The second performance entitled “Noona”, a Moslem family who lived happily until there was a strike from soldiers who killed everybody, only remained some people included Noona. This drama was more touched and dramatic because of the effect of sound and the acting of characters. Finally, both of the main characters (Noona and the head of the soldier) died, then that was the end of the story.

The last is a speech from the lecturer, Mr. Hanung who really appreciated with his students’ works. He also said that both of the performances actually described about the song by Dream Theater entitled “Spirit Carries On”, here are some the favorite lyrics to be sang at the end of the performance that everybody turned of the lamp and one people brought one candle:

We, as the audiences were touched. this was a different performance which the theme was about religion but it was as awesome as the other dramas performed before. (Marisa Fran Lina(F)