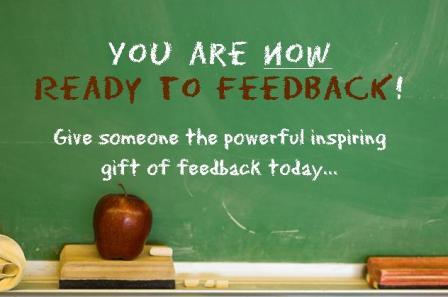 Penny Ur. (1996:242) defines FEEDBACK as “Information … given to the learner about his or her performance of a learning task, usually with the objective of improving this performance”. This definition implies the understanding that consciously the teacher makes some efforts to judge the students’ language and then gives comments for the good of the students’ language production. What is the different then between CORRECTION and FEEDBACK? Correction means to solely give comments on students’ errors while feedback means to give comments on things that are right and also shows a positive attitude to error-making as a useful part of learning.

Giving feedback requires the teacher to first of all realize that it is common for each student to make mistake and students may learn better from the mistakes they make. When the students do not feel threatened by the teacher’s positive attitude toward their mistakes the supportive atmosphere is created and the students are highly motivated to learn language. What kinds of feedback are given after students finish their language tasks?

The main purpose of a language task is to make the students better able to communicate using the target language. That is why the first thing that the teacher should pay attention to is the information conveyed in the students languages. The teacher should carefully consider whether the contents of the students’ sentences are appropriate to the task. For example when the task is for the students to discuss the Independent Day and one of the students says “well, we had our independent day on the early August 1945” the teacher then says “do you mean in the middle of August” since 17th August is not anymore early August this teacher is said to give content feedback. Meanwhile, when another student says “Mr. Soekarno proclaim the Independent of Indonesia on behalf of the nation …” and the teacher then says “be careful with your verb” this teacher is giving form feedback. This teacher wants the student to produce the correct form of the verb ‘proclaim’ which should be changed to ‘proclaimed’ because it happened in the past.

WHEN AND HOW IS FEEDBACK GIVEN?

Many experts say that the most highly valued classroom activity is giving feedback because many researches show that students expect feedback from teachers. It is recommended that teachers give feedback without delay since students can easily remember the feedback when they are still in the context of the lesson. Even though it is not fruitless to give postponed feedback but it is will take some extra energy for the students to remember what exactly did they say and do in the previous lesson.

Whereas some ways of giving form feedback are as follow:

If teachers think it’s important to do both content and form feedback, content feedback comes before form feedback.

Teacher are expected not to confuse the students when they are giving feedback by:

To ease your way to give feedback below are tools that you may use:

to be conveyed (passive verb) : tercakup