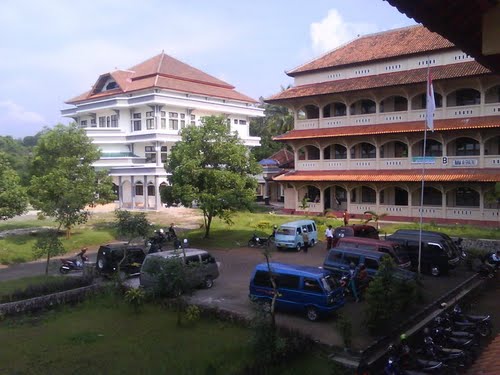 In 2005 the leader of the State Institute for Islamic Studies (STAIN) Salatiga obliged all male and female undergraduate students to join the Ma’had. This year it is optional because of the fact that most students staying in the Ma’had did not comply with all regulations that have been made by the board of Ma’had. It may be influenced by their lack of interest. The students who had big motivation to stay in the Ma’had got maximum result while those who had little motivation got minimum result.

My Experience in the Ma’had

At the first time I was in the Ma’had, I felt very happy after hearing information from a lecturer of STAIN Salatiga that there would be a foreigner who would teach us English. I was challenged to talk to the foreigner as if I were fluent English speaker. But unfortunately I could only have conversation with her once in a week. It was not a problem though. It was my pride. The most important thing was I could practice my English with a foreigner.

At the beginning, I felt afraid to stay in Ma’had because I thought that staying in the Ma’had would require students to be very discipline and there would be plentiful punishments for the students who broke the regulation of Ma’had. I had never stayed in the Ma’had before. I proved to myself that what happended in Ma’had was not like what I imagined before.

I felt happy after staying several months and knowing the real condition of Ma’had. I had many new friends from different background of education. Someday I felt pessimistic because I thought that the students who stayed in the Ma’had were all clever and more experienced than I was. When I heard one of my new friends was speaking English in front of me for the first time, I was dazzled because his English was very good. I didn’t whether it was because he stayed in the Ma’had or not, because I had not known him before and I joined the Ma’had late.

In the Ma’had I was taught by asstidz about how to pray after performing five daily prayers, how to reach ambition, how to face modern life and many things besides Arabic and English. The students were asked to memorizing it, one day ustadz appointed to be the leader of Maghrib prayer. I did it nervously and my body trembled. Eventually, I could do my duty without any difficulties. To be a leader of a praying together was the most impressive experience for me.

By the end of the year I was very happy because I could memorize part of the Qur’an of 30 from Al-Ikhlash up to An-Naba and I got more vocabularies, science and experience of English and Arabic and I intended to prolong my study time in the Ma’had. Even though in the beginning I felt satiated and lazy because I had to wake up early in the morning and I was reluctant to get up.

I was so afraid to go to campus because there were many dogs on the way to campus. I had to go to campus on foot in order to save my money. One day a dog run so fast to chase me so I had to turn very fast too. In the middle of it, my friend screamed, “Do not run? The dog will not stop chasing you!” Then, he asked me with loud voice, “Sit down!” I did it and that’s when the dog stopped chasing me.

In the Ma’had I could not stay up late because at 10 pm every student had to be quiet. Usually I had not been able to sleep before midnight. Sometimes in the morning I was woken up impolitely by one of my friends using his leg or a pillow thrown at my face. I was so annoyed that I decided to stay in a boarding house instead of the Ma’had but after thinking about it twice finally I chose not to move.

After staying in the Ma’had for a year I got significant improvement and I wanted to stay in the Ma’had a year longer. In the Ma’had I could manage and utilize my time as good as possible.

To be + Dazzled (Passive): Terpesona

To be + annoyed: Terganggu