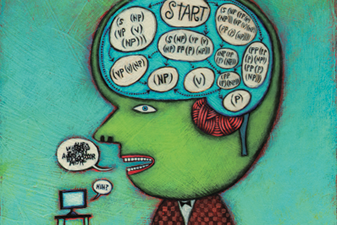 The relation between language study and intelligence is similar with that of language, brain, language acquisition and language development. The relation of them in brain is conceptual but the products of the relation are very concrete. Take for instance; humans are able to produce language utterances after their brain is stimulated by verbal behaviors from outside. Formerly, they only receive the stimuli from others before having abilities to produce the utterances. Then, the recipient tries to retain the stimuli in the deepest brain possessed by all humans that will be recalled sometime when they have been able to produce the language utterances starting from the meaningless to the meaningful ones. Amazingly, at the certain age-approximately six years, the young humans have become matured in the language productions. They are able to use the language by recalling the language stocks in their brain through oral or written symbols. This is absolutely the work of brain sent to the humans’ organs of speech. Thus before they produce the language symbols, they receive the language stimuli or verbal behaviors. The stimuli are processed in the brain, and by the instruction of it, the organs of speech produce the language symbols. At the course of the time, the process of receiving, processing, producing and developing of language symbols becomes polarized and complicated. For the reason, there are two working processes done by brain namely acquisition and production. At the former activity, the brain receives and processes the language stimuli and at the latter stage, it produces and develops into the most sophisticated language use.

This is the fact that the work of brain share to all staged namely from the receiving through processing and from the production through development. In addition, the work is also important for the all stages. Humans will have a great stock of languages when their brains are able to receive the stimuli well. Similarly, the stimuli can be retained longer and stronger when they are able to process those stimuli right. Besides, the language products and the development of them may change significantly when the brains work soundly too. The stage of the processes begins from the simplest through the complicated in accordance with the development of humans’ brain. Humans are only able to receive when the quality and capacity of their brains are still simple. However, they are very skillful to produce unimaginable language utterances when their brain capacity and quality develop.

Neuro-Linguistic Programming practitioners use different terms concerning the ways in which humans experience the world. They consist of visual, auditory, kinesthetic, olfactory, and gustatory or Harmer (2001) say all people have these systems in experiencing the world, even though; they only have one ‘preferred primary system’. When people tend to have more pronounced auditory system, they will be easy to be stimulated by music. Others, who have visual as their primary preferred system, respond most powerfully to images.

Based on the formulation VACOG concept, this is clear that students will respond differently to stimuli and environment. Dede Teeler quoted by Harmer (2001) says that kinesthetic students will behave differently when introduced to the Internet as language learning equipment from the dominant visual learners. The latter will need demonstration of what to be done before they dive into Internet tasks, unlike their kinesthetic friends who just get on and do it. Harmer (2001) says that VACOG also shows some students will get most the things they hear whereas others need to see them. This recommends that purely oral presentations of language will be most appropriate for some individuals in a group. While visual material and written text may be more effective for other students.

Although the two suggestions and different terms concerning language and intelligence but both of which show that there is a much-closed relation between language learning and the intelligence? In addition, they agree that all human beings have such a kind of intelligences. the former emphasizes that everyone has different speed in language learning because the one has different pronounced intelligence. This is the fact the speed is very influenced by the intelligence. Thus, people who have the more pronounced verbal/linguistic intelligence will be faster in acquiring language than the others. The latter, however, more emphasizes the learning styles characterizing the students. Some of the bodies may be visual learners while others are auditory. This also suggests that teachers should give different treatments and use different teaching apparatuses in the language learning. In conclusion, the same learning task and the same teaching equipment may not be appropriate for all of our students.