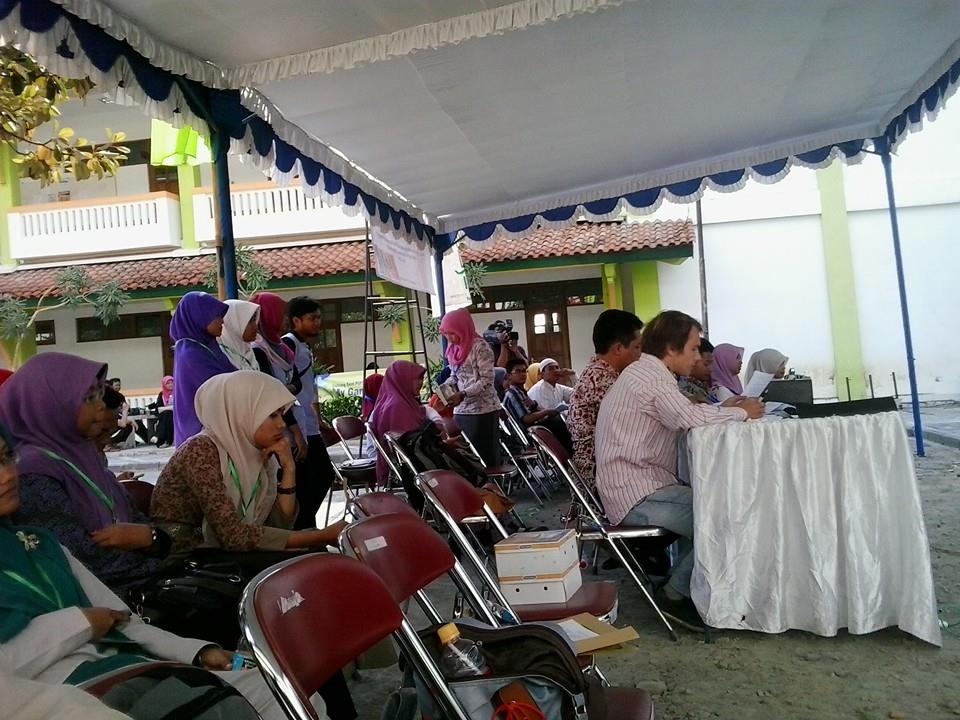 Friday, June 13th, 2014 in IAIN Surakarta place to hold the PORSENI (Sports and Arts Competitions) STAIN-IAIN around Java-Madura or known as IPPBMM V, followed by 9 STAIN= IAIN around Java and STAIN Salatiga particularly TBI (English Education Department) also send their representatives at various branches of the competition. One of the branches is fairly prestigious English Speech. The total are 14 participants divided into 5 boys participants and 9 girls participants.

The competition’s already started after Jum’at pray because in the morning the arena used for the poetry contest. At the time of this speech contest will be judged by 3 judges, 1 female, 2 males: one native speaker.

After taking the participant number, boys of all participants in the order performed alternately. Surya Agung Wijaya, a representative of STAIN Salatiga get the serial number of the fourth of the 5 participants. Actually, Surya’s condition was sick, but he still vigorously joins the competition with his friend accompany him to come early morning on Friday from Salatiga. His speech topic is about the case of Gang Dolly which he said would be better if that “vague” business is transformed to the “creative” business. What is it? The role of the student which is the core theme of this speech, he explained that students are expected to jump themselves directly helped solving the Gang Dolly problem. They participate not only in health education, but also in training to make more HALAL (clear) business, for example is home industry. He gave an example of an owner of Rujak Cingur stall in Surabaya which can reap considerable profit a day with the culinary business.

Then, at the end of the speech, the jury was given an opportunity to comment. The jury responded that Surya was really good both of performance and speech, also the content is quite well-organized. However, Surya’s weaknesses are less to explore the role of students in response to the problems that he described at the beginning and also the title of his speech is rather ambiguous in the beginning but that’s why the audience became very interested to follow the continuation of his speech. Despite all the shortcomings, personally, it is very proud to his performance. “It has already performed quite well, with my less fit body conditions, finally it has been relieved,” said Surya. “Perceiving and pray, may you included in top 3. brother,” I am as his trainer encouraged him.

After some participants performed, it is Fatikhah Fajar Sari’s turn to show her best performance. Previously, Fatiha won a speech competition in the Language Festival held at STAIN Salatiga. As usual, she always stands out with her fast speech style. She’s a little bit of the hassle of referring to the guidelines sent by the committee two weeks before the execution’s day, the length of speech which performed is a maximum of 15 minutes. While the sudden decision of TM (Technical Meeting) at 11 last night decided that the performance of a maximum of 7 minutes duration. Thus, automatically the speech content must be reduced by nearly a half. Definitely for participants who have already memorized the speech, they had to re-memorize the new sequence that they will convey. However looking at her performance, it is enough to give a hope that she will achieve the best because by seeing the other participants, they only give solutions textually without any supporting data or facts. Those important things are the unique key from STAIN Salatiga to achieve the victory. Unfortunately, the female jury did not like the fast speech style of Fatiha. She said, Fatiha only just memorized the text of her speech without any interaction with audiences, so that the jury was tired of listening to Fatiha’s speech. Nevertheless, we still feel satisfied with the performace of Fatiha who has come back to stabilize herself with her best performance. “Open to criticism.” Fatiha responded to those comments.

Alhamdulillah (All praises to Allah), a few moments later I was told by Fatiha that Surya got 1st champion and Fatiha got 2nd champion. Although this time, Fatiha did not get the best, we still proud of their both achievements. Hopefully in the future it will be better. Amen. 🙂

Additionally, there are several other TBI students who managed to get champions in various branches of the competition, among of them are: Taufik Hidayat (2nd winner of Single Men’s Badminton), Novi Zuliatiningsih (1st winner of Girls’ MTQ-reciting Holy Quran) and Nur Hikmah (3rd winner of Girls’ Reading Poetry). Furthermore, STAIN Salatiga overall ranks third as the general winner with 5 gold, 4 silver and 6 bronze medals so in total there are 15 meadals, only the 1 silver medal increment of the 2nd general championship, STAIN Pekalongan. This achievement is actually decreased one level, reminding the last 2 years at STAIN Kudus, we ranked second for general championship with the difference of only 1 gold medal with the host, STAIN Kudus. Hopefully the next PORSENI Insya Allah will be held at STAIN Tulung Agung for 2 years later, and hope STAIN Salatiga can be more victorious. Amen.

For the list of winners can be found on the page: http://porseni.iain-surakarta.ac.id/?page_id=219