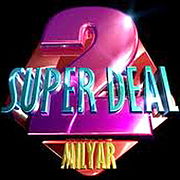 Game for >= 1 student, Things: White Board & Board Marker (Optional), valuable & invaluable things (or you can make/draw it), Focus: Vocabulary mastery & Translation skill

It occurred on Monday this week, when I had to teach Zievan and Ersa again. Actually, at home I had prepared about Family 100 quiz, but then in the time of teaching English the children insisted and selected Super Deal ‘2 Billions’ to be our game of main course that day. It started with we collected some valuable things, just like mobile phone, and I asked Ersa to take money of their monopoly game and some cards of city around the world as the card trip. We also gathered some ‘zonk’ thing (less valuable thing), it can be candies, tissue, pieces of paper, etc.

Afterward, I asked them to hide themselves because I would like to hide the gifts in some places. I also drew 3 curtains on the white board, just like in the real Super Deal. I spread evenly both valuable and invaluable things. The preparation was ready so I called them.

I brought the book of ‘Elementary Grammar Games’ to give them some questions. I gave them 2 choices at first; a pile of money and 1 piece of money. If they could answer correctly the question, they would own the pile of money and deserved 2 choices to play the super deal. If they were wrong, so they would own a piece of money and only deserved once time to play the super deal. In answering the questions, sometimes they got difficulties, so I offered them some clues or changing the questions. But they had to sacrifice their gotten money would be. In detail, I would take 3 pieces of money if they wanted me to give them 1 clue. If they wanted to change a questions, so I had to take 5 pieces of the money.

Then, the game began. After “suit”, Ersa, again was the first player. The questions were almost same with the previous game (see Category Quiz), it is about translation game. For instance, I asked them topics that we had learned before based on their ability; “I watch a sad film but I do not cry”. She had to translate it into Indonesian. It was correct so I gave her a choice again, “you are still with the pile of money or something under the book?”, After she shook her hand and said “Deal”, I would gave them the last offer “You choose something under this book or something behind the curtain 1?”. Saying “Deal” then we opened the curtain. In that day, Zievan successfully own more than 900 billions rupiahs because the monopoly money was in dollar so we multiplied them (in order to be much bigger amount). Ersa got more in the card trip around the world. TThey both also got the “zonk” too; like dirty tissue./paper, a bottle of caju putih oil and a short pencil inside of the wallet, etc 😀

You would find extremely exciting both you and students because it was quite surprising. The game continued until all concealed things were revealed :D, and I guessed that this was their favorite game over all :).

Hopefully, thanks a bunch again for Zievan and Ersa who always give me a new inspiration every meeting 🙂 (F)