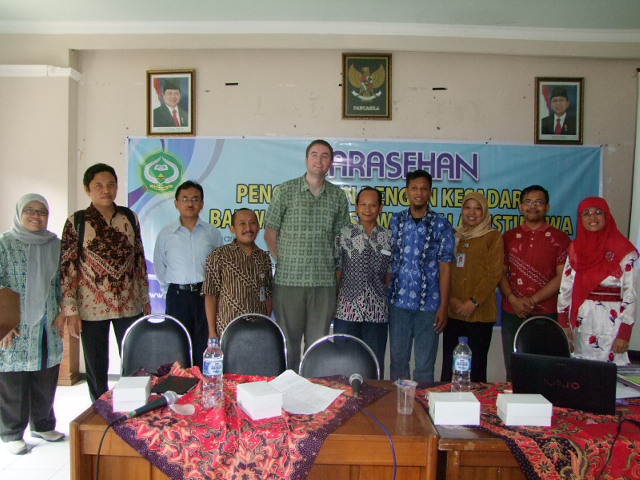 we held a TBI’s discussion by bringing a presenter from the UK, Mr. Nick Palfreyman. He is a deaf, who is currently completing his Post-Graduate Program in Indonesia. His dissertation is comparative study on sign language in Makassar and Solo. When he was in Australia, he also used to meet with our TBI’s lecturer; Mr. Hanung Triyoko which at that time also are taking a master graduate program at La Trobe University . Then, in the UK Mr. Nick also met with other TBI’s lecturer; Mrs. Noor Malihah when she was completing her education at Lancaster University for PhD program. A coincidence that brings blessing :). Finally, we invited Mr. Nick to be a presenter at the TBI’s discussion.

Besides Mr. Nick, also coming other the presenter from the Chairman of GERTAKIN Solo (deaf welfare organization), Muhammad Isnaini and the members, from school students, college students and parents. The event ran smoothly, starting with MC who used English, speech by the Chairman of the Committees; Mrs. Noor Malihah, opening ceremony by Chairman STAIN Salatiga; Dr. Rahmat Hariyadi , M. Pd. , Then the main event was moderated by Mr. Hanung Triyoko. During the event, deaf participants and presenters accompanied by an interpreter who interpret Indonesian into sign language .

When the core event is running, Mr . Nick in presenting the material more comfortable not using a mic . This is because he can freely use his body language to explain, he even spoke Indonesian fluently enough in presenting the material. He points out that the most important thing in the teaching of deaf children is to focus on what students can do rather than what he cannot do, and do not forget to “praise” gives compliments to every slightest development in order to encourage him.

After the session by Mr. Nick, the next agenda is a testimony of the chairman and one of GERTAKIN members about their life journey as deaf. They spoke in sign language and the interpreter presented it into Indonesian. Listening to their stories were quite touched and because it also taught us to be grateful for God’s much blessings has given and it was truly God who created His creature which has any weaknesses, he also has many strengths that even the normal person is not able to do so . Because as shown by Mr. Nick when the last session, he could play a beautiful melody by using keyboard. Indeed God is great :).

In the question and answer session, many participants asked Mr. Nick enthusiastically dealing with how special teaching is. Meanwhile, Mrs. Hj. Lilik Sriyanti, M. Pd, The Head of Tazkiya Consultancy Bureau of STAIN Salatiga also explained at glance about education for ABK (Children with Special Needs) in her Foundation that she was being pioneered. He was also invited to anyone to provide funds for developing the foundation.

At the end of the event, the host quoted a beautiful words from Helen Keller, a deaf, blind and dumb, she was only able to communicate through touch and sign language. But she could be the inspiration for many people in the world, here is the following quotation: “The most beautiful things in life cannot be seen or even touched. They must be felt by the HEART.

“Then which of the Blessings of your Lord will you both (jinns and men) deny?” QS. Ar – Rahman